After Kasserine, what is next for Tunisia? 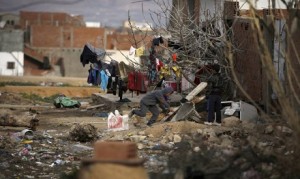 “There will be another revolution if the social and economic circumstances do not change,” said Tunisian President Beji Caid Essebsi on 17 December 2015, the fifth anniversary of the eruption of the Tunisian revolution in Sidi Bouzid.

The demonstrations, which started with the suicide of 26-year-old Ridha Al-Yahyaoui in the west-central governorate of Kasserine on 16 January, are the largest and longest wave of demonstrations Tunisia has witnessed since the revolution (17 December 2010–14 January 2011).

Demonstrations expanded to more than 16 governorates out of a total of 24 in a little over a week, with incidences of violence and looting prompting authorities to impose a curfew around the country.

The inland cities in the west, central, and south Tunisia has also witnessed separate social protests after the “Jasmine Revolution,” the most significant of which was in Siliana governorate in November 2012.

Essebsi’s statement in last December implies that the political elite and even those in power are aware that democracy and freedom of expression and organisation is not sufficient for most Tunisians.

In fact, the political elite explicitly criticise the disregard of economic and social issues such as development, unemployment, poverty, and marginalisation.

These problems have been piling up for decades and remained the same after the revolution, which toppled former president Zine El Abidine Ben Ali, in the midst of political conflicts.

Many viewed the youth abstention from voting in the 2014 parliamentary and presidential elections as a red alert for the general disregard for the seriousness of unemployment and social justice which threatened Tunisia’s emerging democracy.

Nonetheless, such a realisation was not translated into action by Tunisian decision makers.

In fact, under the rule of the coalition led by Nidaa Tounes and Ennahda —who used to be rivals in the past — levels of economic growth decreased by 0.5% while unemployment increased. According to the Global Corruption Index, Tunisia came in the 79th place, after occupying the 53rd place in 2011.

Some of the political elite in Tunisia do make acknowledge the impact of last year’s three terrorist attacks on the economy and employment opportunities. Others, however, believe that the problem is much deeper, arguing that no departure from pre-revolution patterns of development has taken place.

Understanding why protests started in Kasserine lies in the fact that the governorate suffers one of the lowest levels of human development in the North African state.

Moreover, the highest number of people killed during the revolution came from Kasserine.

It is also worth noting that a number of terrorist movements are based in the governorate, seeking a safe haven amid a state of poverty, unemployment, and marginalisation.

In a visit to Kasserine last December, the presence of an inefficient bureaucratic apparatus and anger among youth were noticeable issues.

After Al-Yahyaoui committed suicide, the government acted quickly; several officials in Kasserine were sacked and the government vowed to provide new jobs.

However, this was apparently not enough for the youth, whether inside or outside Kasserine.

The political elite in Tunisia are fully aware that security measures, such as imposing a curfew, will not be sustainable in the face of any expanding crisis.

Even after imposing a curfew, peaceful protests and sit-ins take place every day in Kasserine and in a number of areas in Tunisia, in protest of unemployment.

Tunisian authorities are fully aware that they cannot add fuel to the fire and suppress these peaceful moves.

Delays in legislation and elections

Kasserine’s uprising showed that the left’s opposition represented in the “popular front” is not ready and not willing to play a part in the current government.

To achieve the goals of the social revolution this time, political initiatives were launched as a call for a national dialogue conference between the various political factions.

For instance, the legislative initiative, by the head of the parliament, enacted a law that obliges the state to hire a member from each family in a permanent job.

There are also low hopes of funding for the international and local investors to adopt new projects. Additionally, there is weak infrastructure in the internal governorates, such as the roads, which were the responsibility of those in power prior to the revolution.

The delay in reforming the local administration and the bureaucracy shows that the democracy building process was slow to implement new laws.

Even holding local elections in the fall of this year is still uncertain.

It is in the best interest of some political forces to defer the elections, Dr Chafik Sarsar, the head of Tunisia’s electoral commission, told Ahram Online.

It is noteworthy in this context that even despite the vitality of the political parties, which number at over 200, as well as the vitality of the civil society, which has doubled to 8000 organisations, their influence does not go much beyond holding general elections at hotels in the capital and major coastal cities.

In reality, they have no influence in the villages and the marginalised neighborhoods.

Henceforth, the biggest challenge remains the incomplete political democracy that did not trickle down to development, social justice, or fighting corruption and chronic bureaucracy.