All eyes on Berlin as Libya rivals, world powers set for talks

Representatives from Libya’s warring sides, as well as from several nations, due to meet in latest bid to end fighting.

The two leading parties in Libya’s war, as well as representatives from their foreign backers and other nations, are expected to gather in Germany on Sunday for a highly-anticipated summit aimed at ending nine months of conflict in the North African country.

Libyan Prime Minister Fayez al-Sarraj, head of the United Nations-recognised Government of National Accord (GNA), and Khalifa Haftar, commander of the self-styled Libyan National Army (LNA), are due to join discussions with Russia, Turkey, France, Italy, the United States and others on ending the war, which has raged since Haftar’s forces began an advance on the capital, Tripoli, in April last year.

The warring sides earlier this month agreed to a ceasefire brokered by Russia and Turkey, though Haftar dramatically departed talks in Moscow on January 12 before signing the formalised agreement with al-Sarraj.

Sunday’s Berlin summit is the latest attempt to restore stability and peace to Libya, which has been splintered between competing factions and militias since former leader Muammar Gaddafi was overthrown and killed during a NATO-supported uprising in 2011.

The deeply divided country currently has two rival administrations: The Tripoli-based GNA and another allied with Haftar in the eastern city of Tobruk.

German Chancellor Angela Merkel has said that enforcing a UN arms embargo on Libya will be a priority at the summit. The host nation has been pushing to ensure that political dialogue, rather than further violence, will resolve the conflict – a stance sometimes at odds with the interests of other European Union members such as France and Italy, which have shown support for Haftar, whose eastern-based forces have been accused of indiscriminately bombing civilians.

“What will be signed up to in Berlin has already been agreed upon, including the embargo, the principles of a ceasefire and what the peace process that follows it must entail,” Tarek Megerisi, policy fellow at the European Council on Foreign Relations, told Al Jazeera.

“It will be kind of a general freeze-frame of current countries, what level of influence they have and [what] they’ve been able to impart on the communique that will be signed up to.

“But if previous agreements are anything to go by, I don’t think anybody’s really intending to stick to what they agree to in Berlin.”

International support
The conflict has drawn in several countries from the Middle East and beyond, with Turkey supporting the GNA and Russia, the United Arab Emirates (UAE) and Egypt backing Haftar’s LNA.

Recent months have seen an increase in military involvement from foreign powers, with mercenaries from Russia’s Wagner Group – a paramilitary organisation – reportedly joining the LNA on the front lines and the UAE bolstering air support for Haftar’s forces, who are positioned in the suburbs of Tripoli but have been unable to capture the city.

Since signing in November two separate deals with the GNA (one on security and military cooperation and another on maritime boundaries in the eastern Mediterranean), Turkey has strengthened its presence in western Libya, with President Recep Tayyip Erdogan recently confirming that Turkey had sent troops into the country.

“[These military] escalations … are a by-product of what’s going on in Berlin,” said Megerisi, adding that increasing awareness that the Berlin summit was imminent prompted all sides to seek to strengthen their positions on the ground before formal commitments were made in Germany.

“I think that both sides are ready to continue fighting. They just don’t know when it’s going to start,” he said.

Haftar paid an unexpected visit to Greece on Friday, meeting Prime Minister Kyriakos Mitsotakis and Foreign Minister Nikos Dendias, who spoke warmly of his talks with the renegade military commander, saying Haftar had agreed to void the maritime agreement struck between Turkey and the GNA.

Greece, which has not been invited to the Berlin summit, said it would veto at the EU level any deal that honours the November agreement, which it claims violates international law. 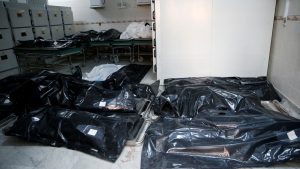 Forgotten civilians
While the build-up to the summit has focused on high diplomacy, the stakes are highest for civilians in Libya, where the effect of the conflict has been devastating, especially in the area around Tripoli where most of the fighting has been concentrated.

Hundreds of civilians have been killed since Haftar’s offensive began in April. More than 150,000 people have been displaced, over half of whom are children, according to the UN.

Water and waste management systems have been severely damaged, raising the risk of cholera and other waterborne diseases.

“None of these political tracks … have seen that civilians, and the effect of these conflicts on civilians, has taken centre stage,” said Hanan Salah, senior researcher for Libya at Human Rights Watch (HRW).

“And that has been a huge problem in all of the interventions to date. Even when it came to the UN-led process, we also didn’t see a strong focus on justice and accountability. It has always been: ‘Let’s get a quick and dirty political settlement’.”

In July last year, head of the UN Support Mission in Libya Ghassan Salame proposed a three-point peace plan, involving a truce, a meeting of all nations involved in the conflict, and the establishment of political, military and economic tracks.

“I’m hoping that at some point there will be a democratic process and people will be able to choose who represents them, instead of actors who have hijacked the situation and are doing exactly as they please,” HRW’s Salah said.